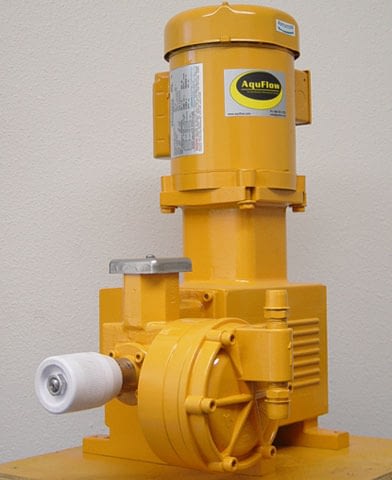 The two chemical metering pumps, made by Hydroflo Corp., have withstood continuous exposure to regenerating chemicals for almost ten years and have required minimal maintenance to the utility.

The plant’s regenerating system is part of the demineralizer, which purifies water on the way to the boiler. According to Robert kale, Lee plant engineering technician, an injection system had been used to add chemicals to the regeneration process. The injector frequently became plugged with scale and rust, preventing the release of sufficient mounts of chemical. Each time the problem occurred, a four hour process consisting of repairs and water retreatment was necessary.

When CP&L replaced the injection system with two Hydroflow diaphragm pumps, “The problem has disappeared, saving us on maintenance coasts,“ stated Kale. “And we no longer have to waste time re-treating plant water, so we can run our regeneration system more efficiently.”

The diaphragm pumps inject 0.83 gallons/minute of sodium hydroxide and 0.6 gallons/minute of hydrochloric acid into the regeneration system at 20 psi. The drives are fully enclosed and the pumps are equipped with large, guided, straight-through flow ball check valves to prevent clogging.

The capacities of the pumps can be adjusted from 0-100 percent at any time, even during operation. This option permits better control over chemical concentrations and more efficient chemical use, said Kale.
The switch from injection system to pumps has allowed CP&L to use 2,000- and 6,000-gallon chemical storage tanks instead of 55-gallon drums. “The injection system was designed to work off drums, so it wasn’t very efficient,” said Kale. “We had to replace the drums on a fairly regular basis. The storage tanks, on the other hand, give us more constant supply of chemical. And they also provide the positive suction head that keeps the pumps running smoothly for better operation.”

Although the pumps have required some maintenance during their then years of service, Kale says the biggest advantages have been their long life and low maintenance “Hydrochloric acid and sodium hydroxide can be very hard on equipment, because they’re so corrosive,” says Kale. “And because the fifty percent sodium hydroxide is especially sensitive to cold temperatures, we have to keep the pumps enclosed in a cabinet. You’d think the constant exposure to harsh chemical fumes in a small space would give the pumps problems. It hasn’t, “ he added.