Determining the Pump Controls (#6 of 8)

This is the sixth of eight articles in the series Sizing & Selecting the Right Chemical Metering Pump.

Before we discuss the topic of controls, it is important to understand that a metering pump takes external signals to turn on or off, as well as increase or decrease the flow capacity to meet the demand precisely. The signal to do these controls can come from a variety of external sources such as flow meters, sensors and / or PLC controllers. 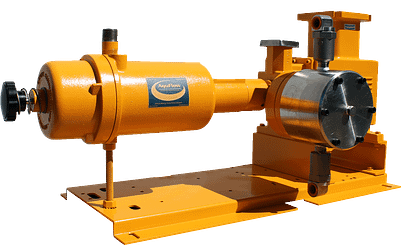 The flow capacity of a metering pump is controlled by two different methods. One is to regulate the speed of the pump stroke which is accomplished with a Variable Speed Drive. The second method is to regulate the effective stroke length of the pump plunger. This stroke length adjustment could either be done manually or by an automatic stroke adjuster such as ECCA. In sensitive applications where there is a risk in using electrical signals and adjusters, these pumps can be controlled by a Pneumatic Stroke Adjuster. Some times in critical applications the engineers suggest using them both which is effectively Dual Axis Controls. That way you can maximize your adjustability and fine tuning. As you may know by now, a metering pump seldom works in isolation. It works as a part of a system. The metering pump often needs to be turned on when there a need for a chemical to be injected and turned off when that need is fulfilled. It also needs to regulate the flow based on the demand. So in addition to the On / Off controls, the pump needs input to increase or decrease the flow capacity.

Frequently that is accomplished with a 4-20mA input where 4 is off, 20 mA is 100% capacity and anything in between is proportionately allocated. However this signal needs to come from either a Flow Meter which senses the chemical flow and regulates it based upon the PLC and the programming, or that signal could also come from a variety of independent sensors and controllers such as pH sensor or ORP sensor and controller.

The IVAX System from AquFlow is an example of a complete control package you can buy with versatile capabilities. AquFlow also provides complete Skid Systems with all the plumbing and electrical controls you need for a successful operation.