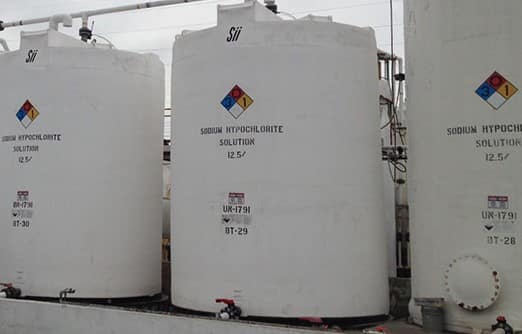 HOW TO PROPERLY STORE CHLORINE:
Watery chlorine should be protected from sunlight. Chlorine is broken down under the influence of sunlight. UV radiation in sunlight provides energy which aids the break-down of underchloric acid (HOCl) molecules. First, the Water molecule (H2O) is broken down, causing electrons to be released which reduce the chlorine atom of underchloric acid to chloride (Cl-). During this reaction an oxygen atom is released, which will be converted into an oxygen molecule: 2HOCl -> 2H+ + 2Cl- + O2

HOW IS CHLORINE PRODUCED?:
Chlorine is produced from chlorine bonds by means of electrolytic or chemical oxidation. This is often attained by electrolysis of seawater or rock salt. The salts are dissolved in water, forming brine. Brine can conduct a powerful direct current in an electrolytic cell. Because of this current chlorine ions (which originate from salt dissolving in water) are transformed to chlorine atoms. Salt and water are divided up in sodium hydroxide (NaOH) and hydrogen gas (H2) on the cathode and chlorine gas on the anode. These cathode and anode products should be separated, because hydrogen gas reacts with chlorine gas very aggressively. Chlorine-based bleach is applied as a disinfectant on a large scale. The substances are also used to bleach paper. Bleaching occurs as a result of chlorine or hypochlorite oxidation.

CHLORINE AS DISINFECTANT:
Chlorine is one of the most widely used disinfectant. It is very applicable and very effective for the deactivation of pathogenic microorganisms. Chlorine can be easily applied, measures and controlled. It is fairly persistent and relatively cheap. Chlorine has been used for applications, such as the deactivation of pathogens in drinking water, swimming pool water and wastewater, for the disinfection of household areas and for textile bleaching, for more than two hundred years.

However, we only started using disinfectants on a wider scale in the nineteenth century, after Louis Pasteur discovered that microorganisms spread certain diseases.

Surfaces can be disinfected by bleaching. Bleach consists of chlorine gas dissolved in an alkali-solution, such as sodium hydroxide (NaOH). When chlorine is dissolved in an alkalic solution, hypochlorite ions (OCl-) are formed during an auto-redox reaction. Chlorine reacts with sodium hydroxide to sodium hypochlorite (NaOCl). This is a very good disinfectant with a stable effect. Bleach cannot be combined with acids. When bleach comes in contact with acids the hypochlorite becomes instable, causing poisonous chlorine gas to escape. The accompanying underchloric acid is not very stable.

HOW DOES CHLORINE WORK AS DISINFECTANT:
Chlorine kills pathogens such as bacteria and viruses by breaking the chemical bonds in their molecules. Disinfectants that are used for this purpose consist of chlorine compounds which can exchange atoms with other compounds, such as enzymes in bacteria and other cells. When enzymes come in contact with chlorine, one or more of the hydrogen atoms in the molecule are replaced by chlorine. This causes the entire molecule to change shape or fall apart. When enzymes do not function properly, a cell or bacterium will die. Chlorine has played an important role in lengthening the life-expectancy of humans.

Learn More About Where AquFlow Pumps Are Used For Chlorine Disinfection